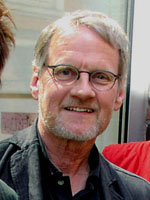 “Jens Uffe Rasmussen’s colouristic sense and great susceptibility to impressions from nature characterize all his work.”

Jens Uffe Rasmussen attended the Funen Academy of Fine Arts. In 1972, twenty-four years old, he made his debút at the Charlottenborg Spring Exhibition in Copenhagen. The works from this periode are lithographs in black and white – paintings and the use of colour are abandoned for some time to come.

Constants and variables can be observd in the work of Jens Uffe Rasmussen. The constants consist of a monumentality and of his ability to place the motif firmly within the picture frame.

Another constant is man. Man experiences a development from being full of contrasts such as fears and doubts, from feeling like a stranger on earth towards a fullfilment af being free through the intervention of nature. Later the contrasts observed in man are manifested in the conditions of life and death as seen in nature.

The discovery of nature takes place in the last seventies; after a removal from Odense to the southcoast of the isle of Funen. He focuses on the microcosmos of the beach, on the life of simple plants and stones. This small word is respected. However this idyllic coast tends to be transformed into a macrocosmos of Alpine or Norwegian mountainscapes. This metamorphosis is symptomatic of the artist – also human beings placed in nature achieve forms that belong there. This association is partly due to the monumentality of a given motif and partly to his horizonless spaces.

In the latest works such as the painting “Iholm” from 1983-84 all the above characteristics are evident in the use af colour as an artistic means and a tendency toward further abstraction.

From 1989 Jens Uffe Rasmussen has worked with abstract compositions with the well-known motif sections. Stones, waves and plants form parts of rhytmic patterns on the picture surface.

In the works of the last years simple and more abstract compositions with great emphasis on the colouristic aspect have been developed.

When some years ago I created a glass collage as ornamentation of a lounge two things separated this kind of work from the work with paintings and litographs. The one thing was the incredible strenght of colour that glass can contain and the other thing the necessity of working with simple flats.

For some years before this I had been working with a repetition of the motif sections in the picture thereby creating patterns. During the work with the glass collage I continued my work with repetitions but also with more patterns above each other in the picture. The ornamentation is placed in such a way that a footbridge passes in front of the picture, consequently the footbridge adds to the picture like one more pattern. In the window glass around the glass collage the crossbars from the windows in the roof are reflected. The reflections thus create a coalescence of many patterns.

In this way the ornamentation and the colouring of the house as a whole weave together colours and functional things.

The clear shapes and pure colours which I came to work with here resulted in the fact that even small shifts of colour- and shifts of lines had a strong effect precisely due to the simplicity. This gave many new possibilities with the picture and these I continued to explore in oil painting..This work developed pure colour and shape compositions.This very simple form appeared to be very suitable for a new ornamentation assignment, a ceramical ornamentation of an auditorium.

In this case I drew a pattern consisting of two wing-shaped figures. The pure forms were easy to draw into the bond of the brickwork. The ornamentation which became built into the facade in this way is made by bricks that are glazed in five different white shades. The waving white figures refer to the sea which lies behind the buildings.

The replacement of the flats and the purity of the colours which I have worked with in the ornamentations have come from my painting and in painting I continue to examine what the material and spatial possibilities of the colours are.

The same motifs have been my starting point for several years: the beaches in the on the small Danish islands and the olive groves with the ochre-yellow soil. It interests me how at one and the same time a picture can tell you something and also have its own natural existence.